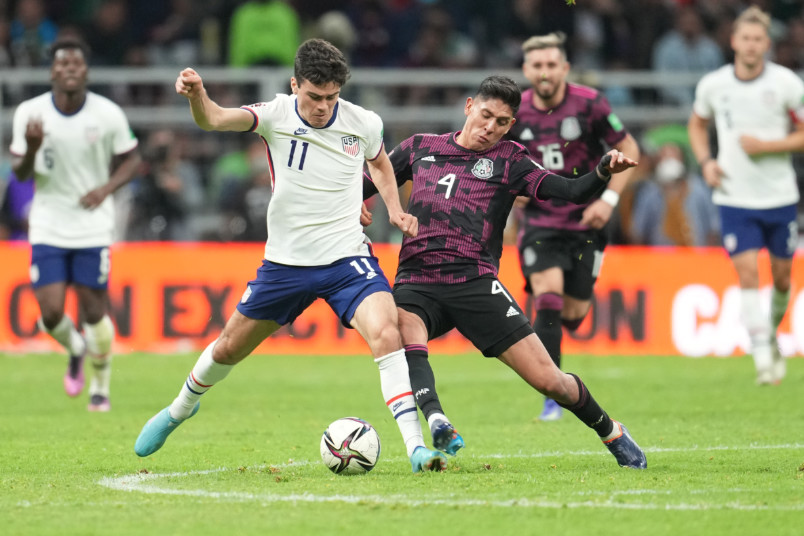 Friday’s soccer news starts with the USMNT returning home after a scoreless draw at Mexico in Concacaf World Cup qualifying. Splitting the points keeps the same order at the top of the Octagonal qualifying table, with the USMNT in 2nd-place. They host a Panama team on Sunday (7pm ET – FS1) that drew 1-1 at home against Honduras, dropping to 5th-place and now chasing Costa Rica for the playoff spot.
That’s how quickly things can change over the final matchdays of the Octagonal, something the frontrunners are well aware of as they try to officially qualify. With Canada losing at Costa Rica, their lead at the top of the table over the USA and Mexico is just three points. While order of finish doesn’t matter for the top three, it’s an indication that leads aren’t necessarily safe.
With that in mind, the USMNT regroups for Panama in need of another lineup adjustment. Timothy Weah and DeAndre Yedlin are now unavailable due to yellow card accumulation, with US Soccer announcing that Shaq Moore will join the squad in Orlando. He’s the latest right back to get the call, following Reggie Cannon’s absence due to a positive COVID-19 test earlier this week.
Berhalter and his technical staff can only plan for so much. With Sergino Dest originally called into camp before an injury with Barcelona, the USMNT is now down three right backs. That’s the kind of situation that underlines the demands of the current schedule, forcing teams to make do in circumstances that shouldn’t pass for normal.
Weah’s yellow card suspension means another attacking option is unavailable, joining another list of players that would be in the squad in an optimal scenario. What that continues to mean for the USMNT is that they haven’t had a truly first-choice window since the Nations League last summer.
Though the goals didn’t happen at Estadio Azteca, what the USMNT showed is promising for this final run of qualifiers. The opportunities were clearly there due to some creative individual play and link-ups that normally would’ve turned into a goal or two. That should be the biggest takeaway, another version of the USMNT that just needs a little more time to get in sync.
Meanwhile, Panama travels to Orlando wondering what happened to their home field advantage following a draw with a team already eliminated. Their offense stalled against Honduras, only putting one shot on goal. Picking that up at the United States is a necessity if they want to retake the 4th-spot from Costa Rica, passing them with their win over Canada. Panama hosts Canada on the final matchday.
Yahoo Sports’ Henry Bushnell works through the scenarios in Concacaf. The Washington Post’s Steven Goff’s match report from Estadio Azteca. MLSsoccer’s Charles Boehm focuses on what the United States got right against Mexico. SI’s Brian Straus with playing for a win at Mexico. ESPN’s Jeff Carlisle puts the focus on missing out on two more points. Soccer America’s Mike Woitalla reports on a strange home game for Mexico. FourFourTwo’s Alasdair Mackenzie works through the chronology of Italy’s failed World Cup qualifying campaign. Football Italia’s Lorenzo Bettoni on the immediate backlash for Italian soccer.
WEEKEND SOCCER TV
Saturday has MLS on UniMas: Charlotte vs Cincinnati at 5pm. Sporting KC vs Real Salt Lake is on TUDN at 7pm. Liga MX on Univision: UNAM Pumas vs Mazatlan at 6pm.
Sunday has Concacaf World Cup qualifying on Universo: Canada vs Jamaica at 4pm. El Salvador vs Costa Rica is on Telemundo Deportes at 5pm. FS1 has USA vs Panama at 7pm. Honduras vs Mexico is on Telemundo at 7pm. MLS on ESPN Deportes: Portland vs Orlando City at 4pm.
No games on Monday’s schedule. All Times Eastern
All links are provided as a courtesy. US Soccer Players nor its authors are responsible for the content of third-party links or sites. For comments, questions, and concerns please contact us at editor@usnstpa.com
Photo by John Dorton – ISIPhotos.com