LAFC’s wait for a first-ever road win against the L.A. Galaxy continued on Saturday with Greg Vanney’s side defeating their in-state rivals 2-1 at Dignity Health Sports Park.
First-half goals from Javier Hernandez and Sega Coulibaly was all the Galaxy needed to pick up a second-consecutive league win and move one point behind LAFC for top spot in the Western Conference.
Cristian Arango pulled one goal back for LAFC late in the second-half, but Steve Cherundolo’s side could not muster up a full comeback on road soil. It was LAFC’s first defeat of the new season and the fourth-consecutive winless result against the Galaxy dating back to 2020.
The Philadelphia Union stayed top of the early Supporters’ Shield race, using an own goal from Columbus Crew goalkeeper Eloy Room to defeat the Crew 1-0 at Subaru Park. A Jose Martinez cross from the right wing was not handled cleanly by Room, as Caleb Porter’s side fell down early on the road.
Andre Blake registered a four-save shutout as the Union extended their unbeaten run to six matches in league play.
The Houston Dynamo were involved in the shootout of the night, outlasting the San Jose Earthquakes to earn a 4-3 victory. Carlos Ferreira registered his first-career MLS brace while the Dynamo avoided a late scare at BBVA Compass Stadium, extending their unbeaten run to four matches.
Despite a brace from Quakes striker Jeremy Ebobisse, Matias Almeyda’s side suffered a fourth defeat through their opening six matches of 2022.
Jesus Ferreira continued his hot run in MLS play, scoring a brace in FC Dallas’ 3-1 home victory over the Colorado Rapids. Fellow homegrown Brandon Servania delivered a sensational goal as well, capping off a strong evening for the young midfielder. FC Dallas has won three of its last four matches while the Rapids saw their four-match unbeaten run snapped with the road defeat.
Inter Miami used a hat trick from Leonardo Campana to defeat the New England Revolution 3-2 at home. Campana’s third and final goal of the match came in the 88th minute and condemned the Revs to a fourth league defeat of the new season.
Elsewhere, Orlando City defeated the Chicago Fire at home while both Nashville SC and the Portland Timbers picked up away wins.
Sunday’s scores will be added throughout the day.
Orlando City 1, Fire 0
(Ercan Kara 59′) 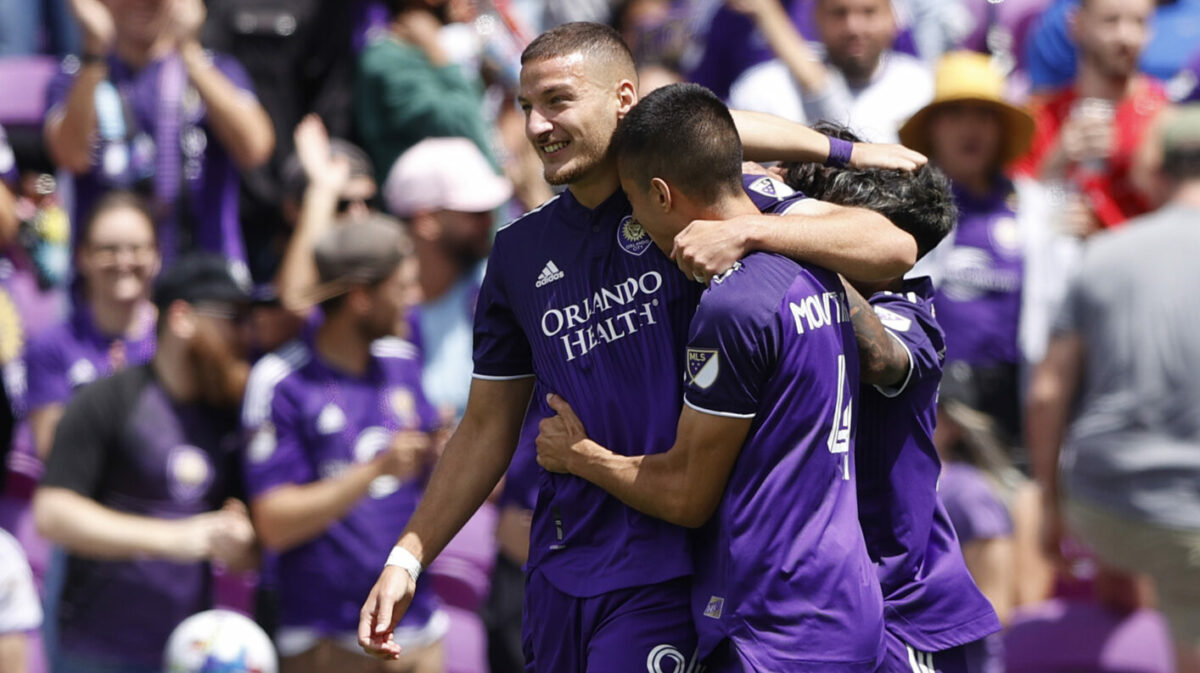 Nathan Ray Seebeck-USA TODAY Sports
Man of the Match: Alexandre Pato assisted on the only goal of the match and easily could’ve added a goal himself, if not for the crossbar of Gabriel Slonina’s net.
Moment of the Match: Ercan Kara broke the deadlock in the 59th minute for his first MLS goal, which proved to be the winner.
Match to Forget: Brian Gutierrez’s first MLS start didn’t go as planned for the Fire as the 18-year-old was sent off after receiving two yellow cards in the opening 43 minutes.
Inter Miami 3, New England Revolution 2
(Leonardo Campana 17′, 23′, 88′) – (Justin Rennicks 11′, Carles Gil (pen) 67′) 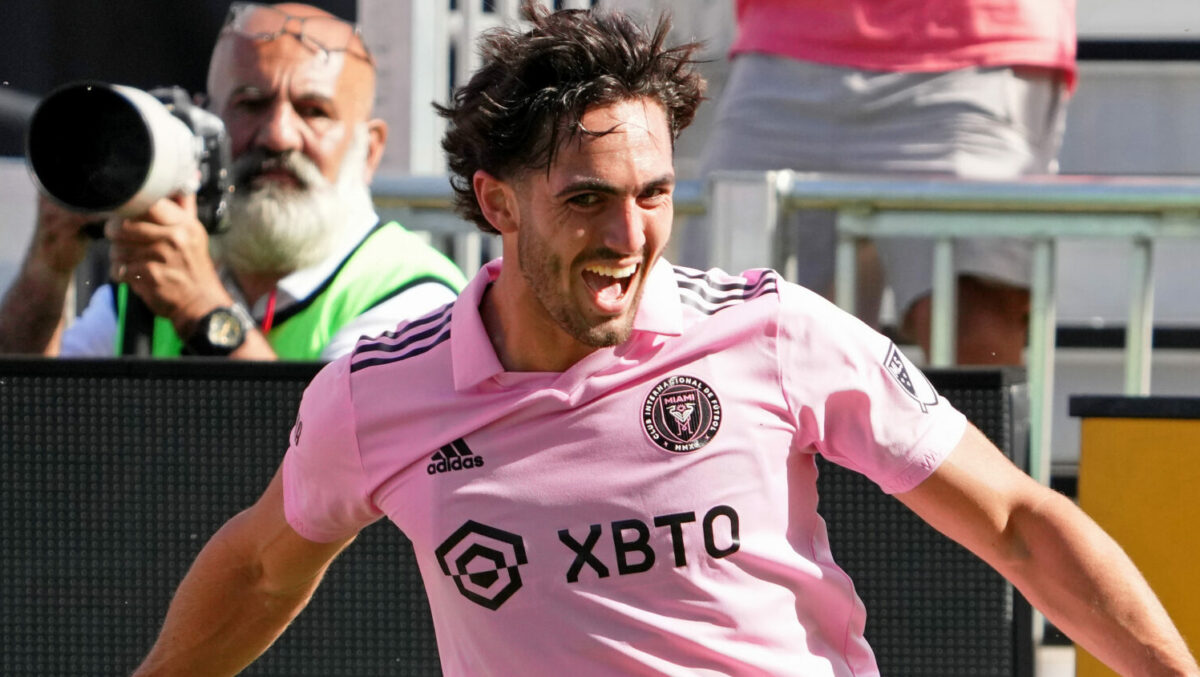 Jasen Vinlove-USA TODAY Sports
Man of the Match: Ecuadorian forward Leonardo Campana scored a hat trick, making good on Phil Neville’s decision to start him in the absence of Gonzalo Higuain.
Moment of the Match: Campana completed his hat trick in the 88th minute, capitalizing on Brad Knighton’s failure to secure a loose ball.
Match to Forget: Brad Knighton turned in a mostly steady game up until the late moments. Knighton could not secure the loose ball in front of goal in the 88th minute, which led to Campana completing his hat trick.
Red Bulls 1, CF Montreal 2
(Omir Fernandez 14′) – (Rudy Camacho 71′, Romell Quioto 81′) 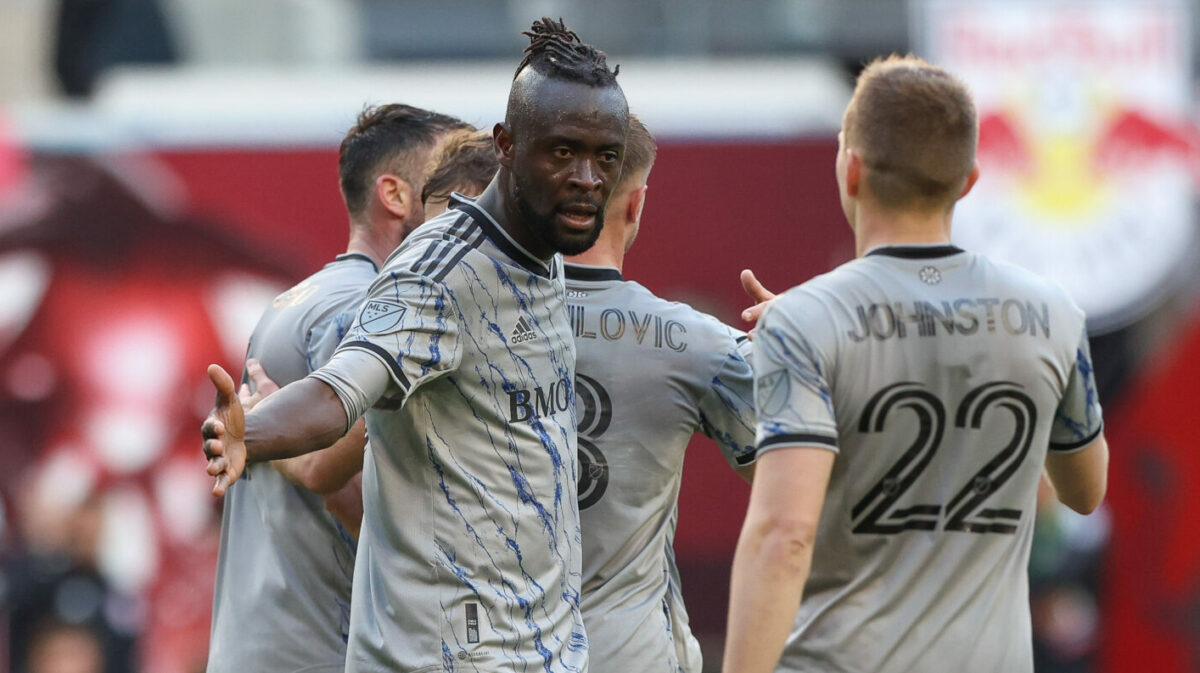 Vincent Carchietta-USA TODAY Sports
Man of the Match: Rudy Camacho helped spark the comeback win for CF Montreal and also delivered a strong performance in defense. Camacho won 8/11 duels, made 7 clearances, and won his only tackle attempt.
Moment of the Match: Romell Quioto’s go-ahead goal came off an error from Red Bulls goalkeeper Carlos Coronel, propelling CF Montreal in front for good.
Match to Forget: Coronel normally is up to his game for the Red Bulls, but after being caught out of position during Quioto’s game-winning goal, the Brazilian will feel disappointed at hurting his team’s chances of three points.
Union 1, Crew 0
(Eloy Room (OG) 2′) 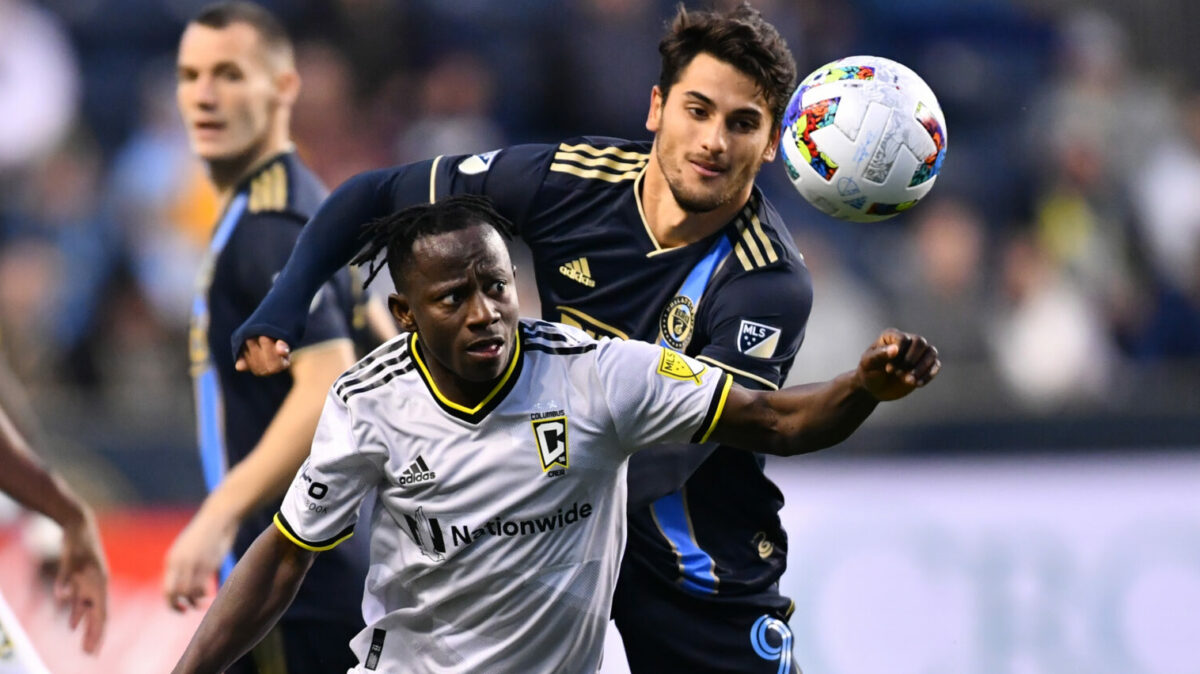 Kyle Ross-USA TODAY Sports
Man of the Match: Andre Blake registered four saves as the Union posted their fourth-consecutive clean sheet. The Jamaican international continues to be one of the best in MLS at his position.
Moment of the Match: Alex Matan’s last-gasp shot was pushed aside by Blake in stoppage time, keeping the Crew at bay one final time.
Match to Forget: Eloy Room’s blunder in the opening minutes put the Crew on the back foot and truly hurt their chances of earning anything on the road.
LA Galaxy 2, LAFC 1
(Javier Hernandez 13′, Sega Coulibaly 31′) – (Cristian Arango 79′) 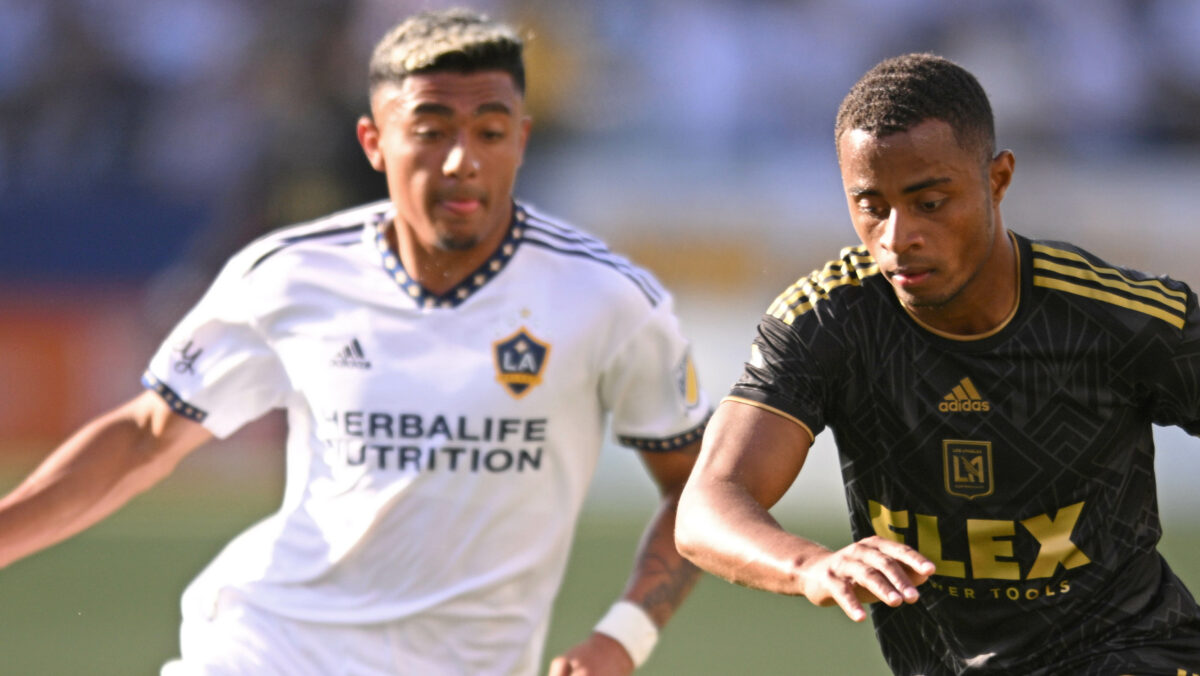 Orlando Ramirez-USA TODAY Sports
Man of the Match: LA Galaxy goalkeeper Jonathan Bond preserved the lead in the second half. Bond made six saves, including an excellent tipped save of a Jose Cifuentes header in the 65th minute.
Moment of the Match: Javier “Chicharito” Hernandez keeps on scoring. He nabbed the opener in this match with a back-post header in the 13th minute.
Match to Forget: Carlos Vela couldn’t make his mark on this match. Vela took four shots, but directed only one on goal. He hit the post on a clear-cut chance in the first half. LAFC kept the majority of possession, but couldn’t score more than once on 17 shots and seven shots on goal.
Real Salt Lake 2, Toronto FC 2
(Justin Meram 7′, Damir Kreilach 43′) – (Kosi Thompson 9′, Jayden Nelson 79′) 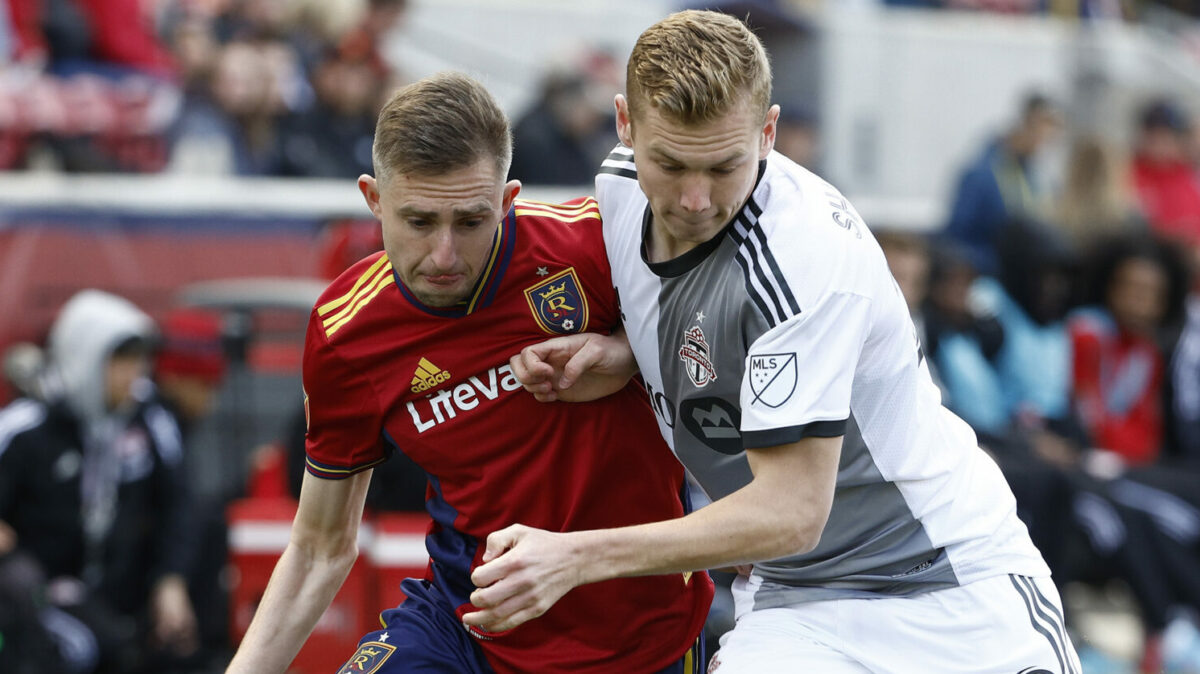 Jeffrey Swinger-USA TODAY Sports
Man of the Match: Justin Meram scored his first goal of the season for Real Salt Lake and was also a constant threat in his 75-minute outing. Meram finished with four key passes, won 5/10 duels, and delivered a strong work rate.
Moment of the Match: Jayden Nelson needed only five minutes to tie things up for Toronto FC. The 19-year-old Canadian came off the bench to score his first MLS goal.
Match to Forget: Veteran defender Carlos Salcedo was sent off in the final minutes of the match and will now miss the next few matches for TFC. Luckily for Salcedo, his late ejection didn’t lead to a winning goal for RSL.
FC Dallas 3, Rapids 1
(Brandon Servania 45+2′, Jesus Ferreira 51′, 89′) – (Diego Rubio 30′) 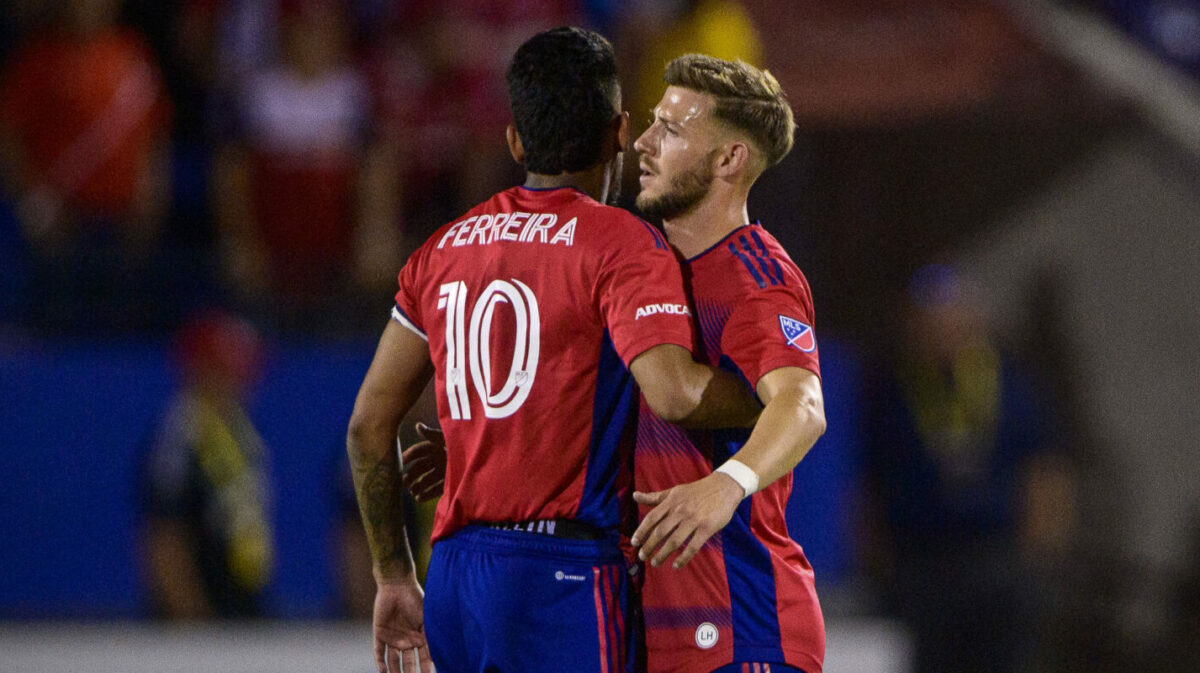 Jerome Miron-USA TODAY Sports
Man of the Match: Jesus Ferreira continued his positive form for FC Dallas, scoring a brace and forming a strong connection with fellow homegrown Brandon Servania.
Moment of the Match: FC Dallas needed a spark heading into the second half and Servania’s long-range blast truly swung momentum into the home team’s favor.
Match to Forget: The entire Rapids backline was poor in the loss, but Lalas Abubakar was pestered constantly by Alan Velasco. The veteran centerback will hope for a better showing next weekend.
Sporting Kansas City 1, Nashville SC 2
(Remi Walter 25′) – (Dave Romney 51′, CJ Sapong 68′) 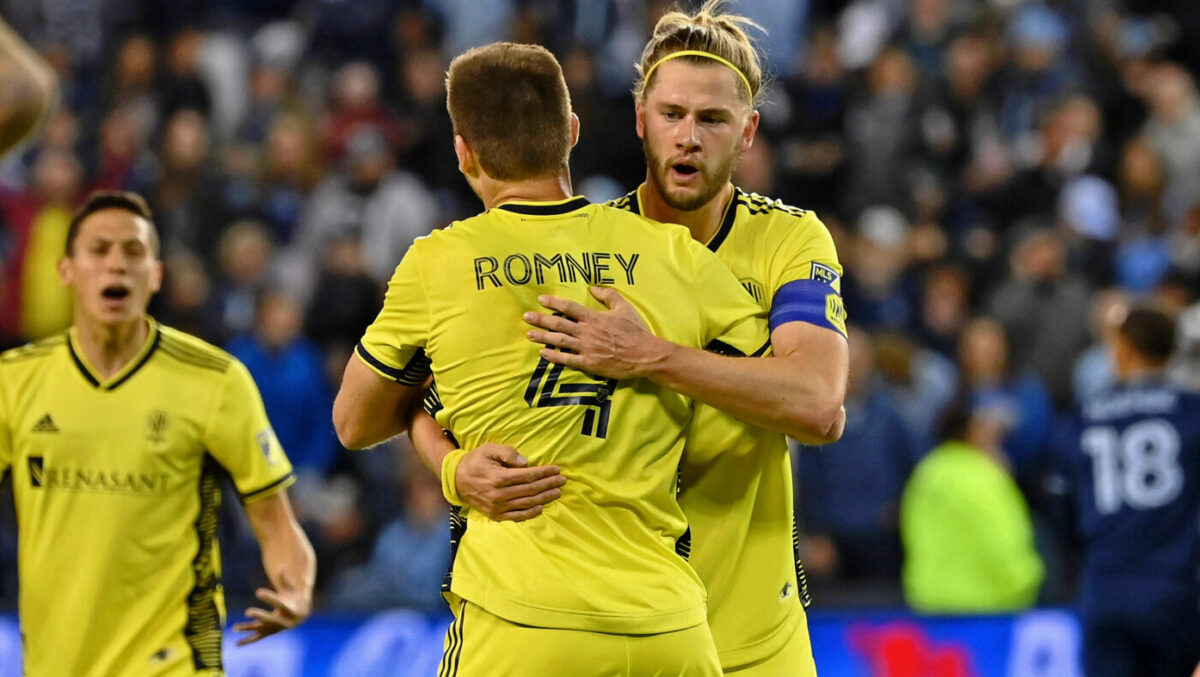 Peter Aiken-USA TODAY Sports
Man of the Match: Sean Davis made sure Nashville kept control of the midfield. He supplied an assist and completed almost 90 percent of his passes.
Moment of the Match: CJ Sapong scored on his former club in the 68th minute, cleaning up a deflected shot that trickled in front of goal for an easy finish.
Match to Forget: Johnny Russell struggled to lead Sporting KC’s attack toward an equalizer. The Scottish winger had five shots with none on target.
Dynamo 4, Earthquakes 3
(Carlos Ferreira 8′, 68′, Darwin Quintero 43′, Teenage Hadebe 57′) – (Jeremy Ebobisse 25′, 28′, Tommy Thompson 77′) 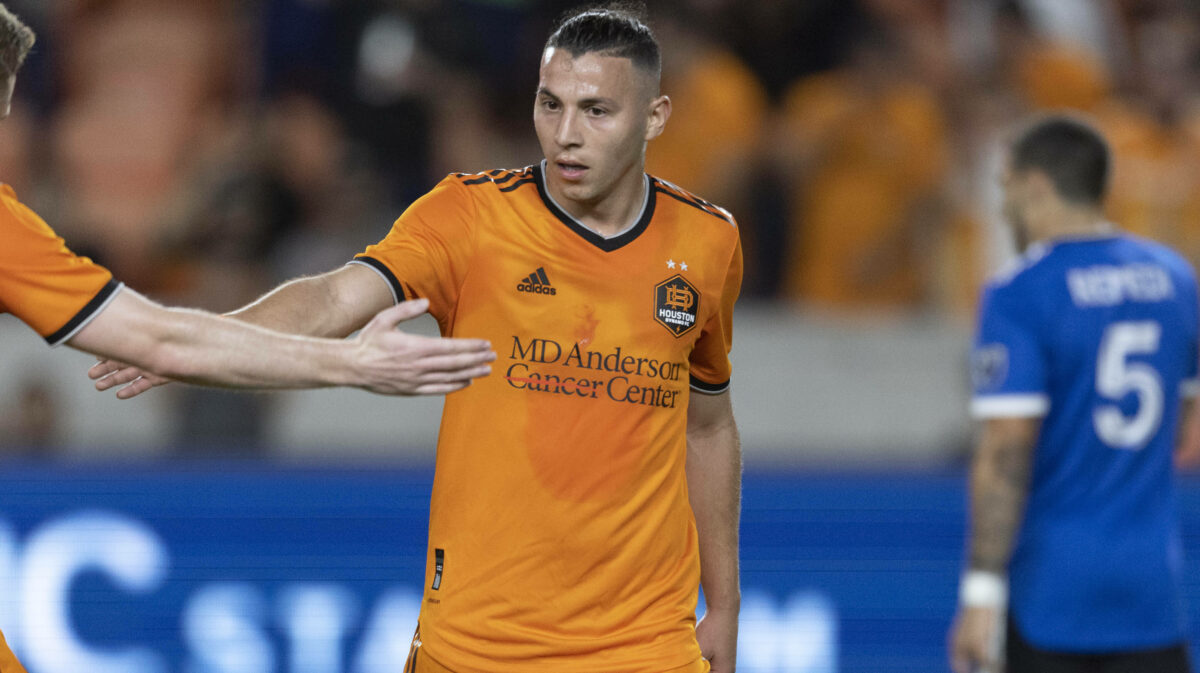 Thomas Shea-USA TODAY Sports
Man of the Match: Carlos Ferreira delivered his first two MLS goals on Saturday, helping the Houston Dynamo to an important win over San Jose. The 24-year-old Paraguayan was a thorn in the Earthquakes side all night, putting in a MOTM showing in front of the home fans.
Moment of the Match: Ferreira’s second goal proved to be the decider in the match, capping off a strong night for the young forward.
Match to Forget: J.T. Marcinkowski conceded four goals in the loss and although has delivered better showings earlier this season, will feel he could’ve done better in the loss.
Whitecaps 2, Timbers 3
(Cristian Dajome 76′, Ryan Gauld (pen) 90+6′) – (Dairon Asprilla (pen) 42′, Jaroslaw Niezgoda 60′, Yimmi Chara 78′) 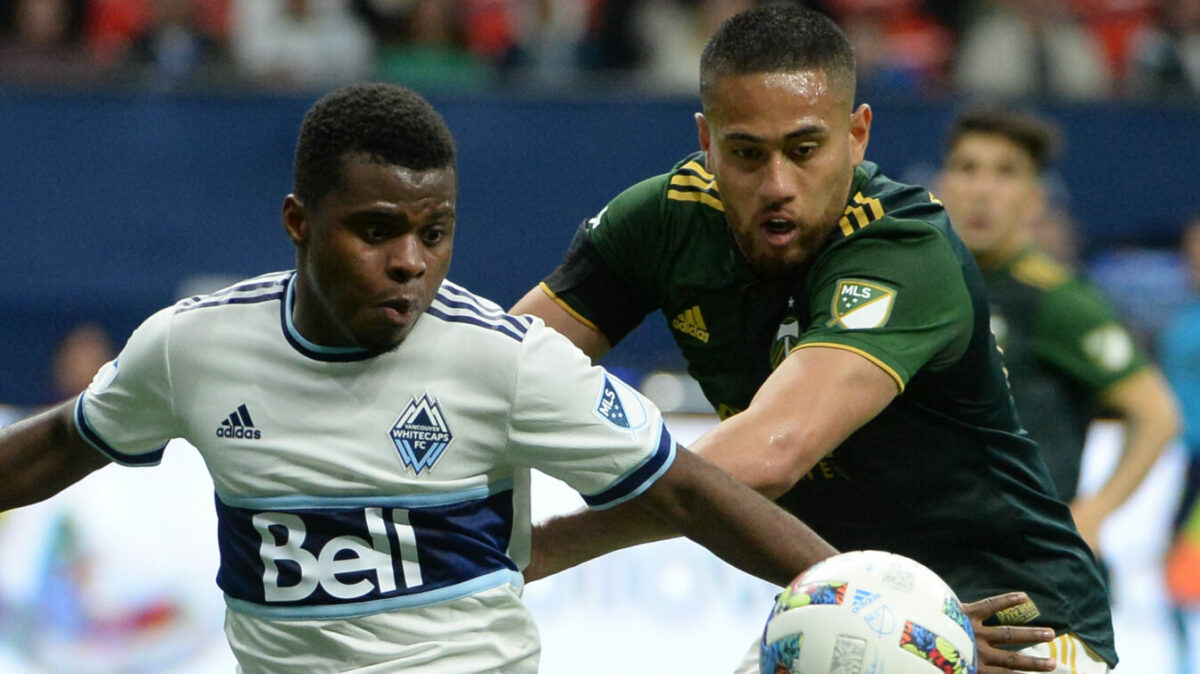 Anne-Marie Sorvin-USA TODAY Sports
Man of the Match: Yimmi Chara burst forward often for the Timbers. He scored to ensure the win in the 78th minute, and started the play that led to Jaroslaw Niezgoda’s goal in the 60th minute.
Moment of the Match: Yimmi Chara showed excellent control and a powerful strike in the 78th minute, when he scored to hand the Timbers a 3-1 lead.
Match to Forget: The Whitecaps’ Cristian Dajome scored to give the Whitecaps a lifeline in the second half, but he could have done so much more. Dajome committed a foul that led to Dairon Asprilla’s penalty-kick goal to open scoring, and he missed a penalty in the 88th minute.