MLS results, Wales and England in the UEFA Nations League

MLS results, Wales and England in the UEFA Nations League 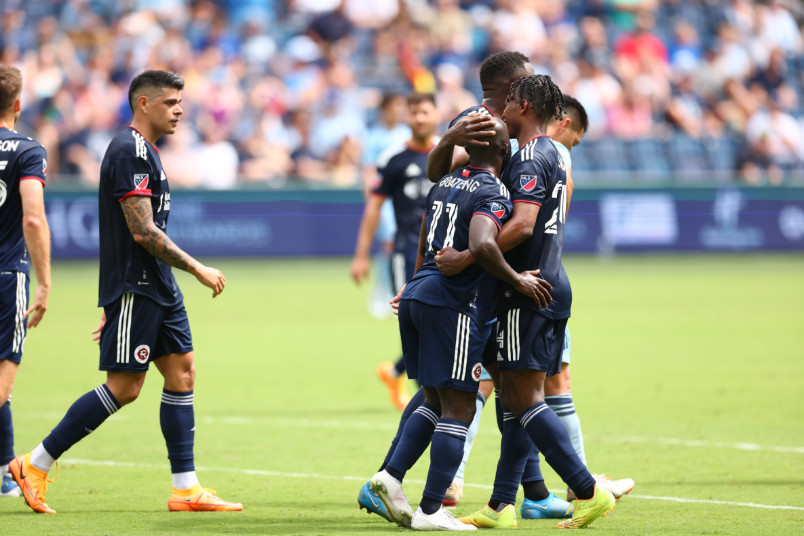 Monday’s soccer news starts with the MLS results. Charlotte shutout the New York Red Bulls 2-0 at home to open the abbreviated weekend schedule. Ben Bender scored in first-half stoppage time and Derrick Jones doubled the lead in stoppage time. Charlotte goalkeeper made one save to keep the clean sheet.
Nashville and San Jose finished scoreless at GEODIS Park. Both teams finished with six shots on goal.
The New England Revolution beat Sporting Kansas City 2-1 on the road. Gustavo Bou put the Revs up in the 30th. Sporting Kansas City went a man when Oriol Rosell saw red in the 48th, equalizing through Johnny Russell in the 52nd minute. Emmanuel Boateng scored for New England in the 87th.
“Games in the summer months in our league should not be played in the afternoon,” New England coach Bruce Arena said. “Really difficult for both teams. The heat, humidity was really challenging today. It made for a bit of a slow and sloppy game, but you know, I give their team credit. When they went down to 10 men, I thought for 15 minutes, they played very well and had advantages on us. And then I think over the last 15-20 minutes of the game, we played pretty well, and created some chances, but were sloppy with our chances and got a bit of an ugly goal, which we’re going to take. It’s an important three points on the road.”
In the Concacaf Nations League, Mexico shutout Suriname 3-0 at home. Israel Reyes scored in the 3rd and Henry Martin converted a 40th minute penalty. Erick Sanchez finished off the scoring four minutes into stoppage time. Mexico had a penalty saved in the 84th minute. Mexico goalkeeper Carlos Acevedo made two saves to keep the clean sheet.
Moving to the USMNT’s World Cup group opponents, England drew 0-0 at home with Italy in the UEFA Nations League. England put four shots on goal to Italy’s three. Wales drew 1-1 at home with Belgium. Trailing from a 51st minute Youri Tielemans goal, Brennan Johnson equalized for Wales in the 86th minute.
“I’m really proud of them for that performance,” Wales manager Rob Page said. “We’ve created chances against an excellent team and we more than deserve our point. If you’re not creating chances, then it’s time to worry.”
Shaq Moore’s Tenerife drew 0-0 at Girona in the first-leg of the Sengunda Division promotion playoffs. The series concludes at Tenerife on Sunday.
In MLS, defender Giorgio Chiellini is now a member of LAFC. “I felt very strongly about this new chapter in my career, and I am grateful to LAFC for this opportunity,” Chiellini said in a press statement. “I’m thankful for all my years with Juventus and I’m looking forward to winning many more trophies in Los Angeles.” Juventus posted a farewell to their captain who played 485 league games with the club winning nine Serie A titles.
The IFAB announced that <a href="https://the ifab.com/news/the- ifab-permanently-approves-five-substitute-option-in-top-level-competitions”>the five-substitute option is now permanent. Yahoo Sports’ Henry Bushnell considers the calendar for the USMNT. ESPN’s Kyle Bonagura on the USMNT offense against Grenada. The Athletic’s Paul Tenorio has takeaways from USMNT 5 – Grenada 0.
TUESDAY’S SOCCER TV
Concacaf Nations League on FS1: El Salvador vs USMNT at 10pm. Univision has Jamaica vs El Salvador at 8pm. UEFA Nations League on FS2: Armenia vs Scotland at 12pm. FS1 has Germany vs Italy at 2:45pm. World Cup qualifying on FS2: Costa Rica vs New Zealand at 2pm ET.
All links are provided as a courtesy. US Soccer Players nor its authors are responsible for the content of third-party links or sites. For comments, questions, and concerns please contact us at editor@usnstpa.com
Photo by the New England Revolution