Chris Mueller moved to Scotland aiming to make the most of his first stint abroad, but after a frustrating time with Scottish Premiership club Hibernian, Mueller is back in Major League Soccer and focused on getting back to his best on the field.
Mueller joined the Chicago Fire last week, sealing a return to his home state after growing up in Schaumburg, Illinois and playing as a youth player for the Chicago Sockers. The 25-year-old made his Fire debut in last weekend’s 4-1 road loss to Atlanta United, earning his first 45 minutes under Ezra Hendrickson and playing with a new group of teammates.
Mueller officially joined Hibernian in January from Orlando City, but struggled for consistent playing time, scoring one goal in 11 combined appearances. Although Mueller only lasted four months abroad with Hibs, the five-year professional made the most of an opportunity not many players get in their careers.
“I wasn’t playing as much, you know, it was really hard for me,” Mueller told reporters in a conference call on Wednesday. “But nonetheless I think that I went there for a reason. I learned a lot about the experience, in terms of being in a country, being in another culture, seeing how people from different parts of the world function in their day-to-day lives. I think that I tried to go into the whole thing with an open mind and tried to learn from the experience as it was, not even just on the football pitch, although I learned a ton about myself on the football pitch as a player.”
“It was more about the mental grind that I was going through in terms of not getting the minutes that I wanted,” he said. “The team wasn’t doing particularly well either, we were losing a ton of games, and when you’re over there in Scotland, football is No. 1 for all the people. And if you’re not doing well on the football pitch, it’s hard to have an outlet in any other way or shape. It seems like all eyes are on you guys, and when things aren’t going well, people let you know about it. It’s a much higher-pressure situation and all that, so just completely different.” 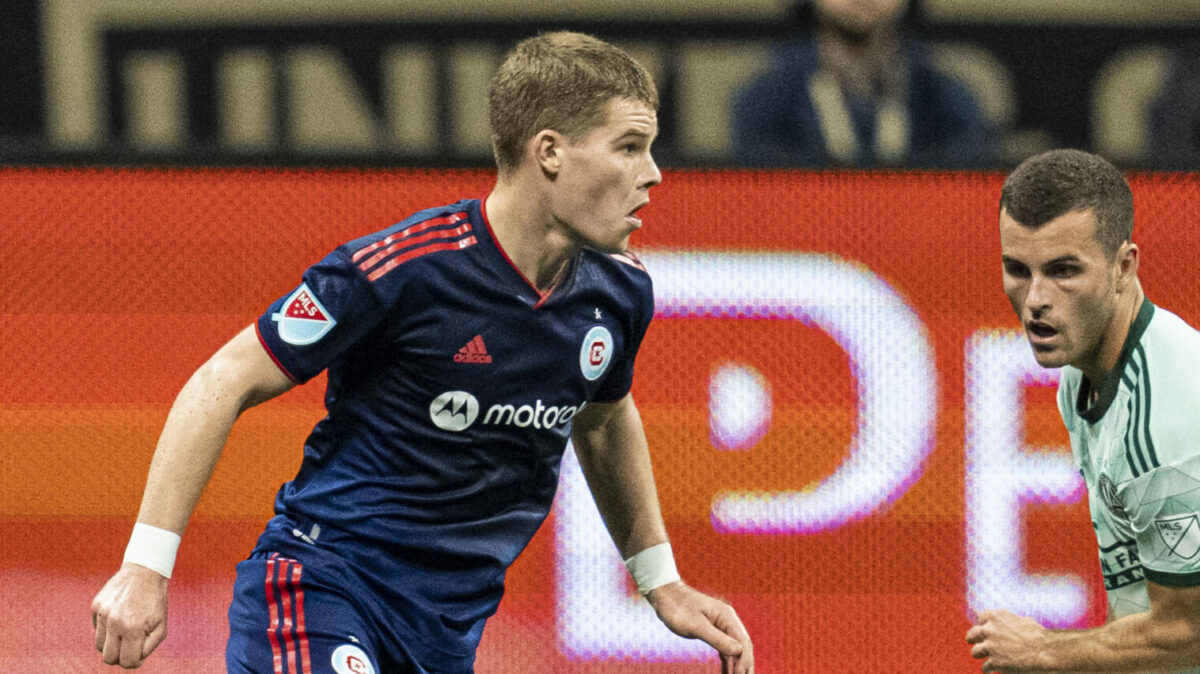 Dale Zanine-USA TODAY Sports
Mueller’s arrival in Chicago is a welcomed sight, especially with the Fire struggling for results in Hendickson’s first season in charge. The offseason acquisitions of European star Xherdan Shaqiri and MLS veteran Kacper Przybylko haven’t propelled the Fire surging up the Eastern Conference standings, with the duo only combined for four goals in 10 matches in 2022.
While at Orlando City, Mueller was one of the top creative threats for the Lions, eventually totaling 21 goals and 24 assists in 116 combined league appearances. Mueller’s willingness to run at defenders and use his pace out wide helped him earn his chance in Scotland and now he will hope to do the same for the last-place Fire.
“Chris is a very good player,” Hendrickson said. “He’s another player that we’re going to want to get on the ball because of the things that he can do, on and off the ball. His runs off the ball, his timing, getting behind defenses is very good. So that’s someone who will help Shaq [Xherdan Shaqiri] as far as having someone else to get on the end of things, because we all know what Shaq can do with the ball. And now we’re starting to push the issue more about getting behind defenses, which will open up our game a lot more.
“So, Chris brings that opportunity for us, his 1-vs-1 abilities, as well as his ability to get behind defenses and get on the end of some of these passes from Shaq and from Gaston [Gimenez] and the guys from the midfield. We’re very happy to have him and he’s a great addition to the team.”
Mueller will fit right into the Fire’s winger corps, which has had several different players get the nod this season. Stanislav Ivanov, Brian Gutierrez, and Fabian Herbers have all earned minutes through the opening 10 matches of the season, but Hendrickson will need more from his attacking unit if the Fire want to avoid a dismal season at the bottom of the table.
With Shaqiri pulling the strings in midfield, Mueller is ready to pair up with one of MLS’ top offensive talents to start a surge of the standings.
“Shaqiri’s obviously a really, really good player who’s played at the top level all across Europe and whatnot,” Mueller said. “When you have someone like that who has such good vision and is so good on the ball, he helps in the pockets. But in terms of I feel like off the ball, I can make some pretty decent runs in behind for him to pick out. And obviously with a player of his quality, he’s got it in his locker to put a ball over the top or to slip a ball through. As long as I’m making good runs and looking to combine with him, I think that we can definitely work well together in that sense.”