Streaming spending turbocharged a genre that studios got nervous about bringing to cinemas, leading filmmakers and stars to guess about what it takes to keep meet-cutes on the big screen.By now, the narrative is familiar: After slumping box office results, the romantic comedy genre was mostly abandoned in theaters in favor of superhero extravaganzas and IP-driven fare. Then Netflix’s data-focused team found that its subscribers were watching older rom-coms and the streaming giant began greenlighting its own supply to keep up with apparent viewership demand. Features like Set It Up, To All the Boys I’ve Loved Before and Always Be My Maybe began driving social media chatter, fueling the idea that streaming “saved” the genre.

But is streaming where the genre must stay? That’s the next debate. “For some reason, it’s become an especially big question in the rom-com genre: How do you make a romantic comedy theatrical?” says producer Juliet Berman, who has worked on both rom-coms that went to theaters (That Awkward Moment) and streaming (Set It Up).

Related Stories
Netflix Renews Korean Reality Show 'Singles Inferno' for Season 2
Obamas' Higher Ground Boards Netflix Thriller 'Leave the World Behind'
Traditionally, an appeal of the rom-com genre is that it’s a lower-budget affair, as its main expense can be hiring A-list talent. It’s also a genre that lends itself well to less-established film performers as leads. “Overall, the studio system wants movies that make a billion dollars, and that’s where a great percentage of their focus is,” says director Judd Apatow, who presided over such rom-com hits as Knocked Up and Trainwreck when the genre was a staple in theaters. “But if you’re spending a lot of money on an action franchise, it is important for all the studios to hedge bets with smaller-budgeted movies that have the potential to have big upsides.”
Compounding the issue are the changing demographics of the box office recovery. In 2019, the gender breakdown among theatergoers to the top-grossing films of the year was relatively evenly split, 49 percent female to 51 percent male. But the percentage of female moviegoers seeing top films in theaters dropped in the pandemic era to 45 percent in 2021, the MPA revealed in its annual report published in March.
“It’s true for probably almost all movie executives that we love a great romantic comedy, but we have seen over the years how that genre has become challenged because the audience has become so familiar with the tropes and conventions,” says Erik Baiers, senior executive vp production development at Universal, which split the difference by debuting the Jennifer Lopez-Owen Wilson rom-com Marry Me in theaters for Valentine’s Day, where it since has grossed an unremarkable $49 million globally, and debuting the title simultaneously on Peacock. “It is definitely a cart versus the horse kind of debate that we have here, which is, ‘Do people see rom-coms on streaming because that’s where they want to see that genre, or is it because it’s the only place to go to see that genre in recent years?”

Marry Me director Kat Coiro puts it more bluntly: “Do I wish that we’d had like a week just in the theaters? Probably, because it’s a communal movie.”
There’s a few big theatrical bets in the pipeline, including Universal’s Billy Eichner-starring Bros, hitting theaters in September, and October’s Ticket to Paradise, with George Clooney and Julia Roberts. “Bros needed to be theatrical,” says its director Nick Stoller. Given its status as the first LGBTQ rom-com from a major studio, Stoller adds: “There’s a historic nature to this movie and the idea of it being theatrical.” Stoller calls Sandra Bullock-Channing Tatum starrer The Lost City‘s strong $30.4 million opening weekend on March 25-27 “great for comedy,” adding, “I think studios are gonna need a few comedies to work. People are still like, ‘Who knows what the pandemic means, combined with streaming?'”
Jason Kilar, the former WarnerMedia CEO who exited amid AT&T’s merger with Discovery, told THR in an interview earlier this month that rom-coms are among the types of films that the company intends to finance and support with theatrical releases, even if that includes a day-and-date model in some global markets. “I suspect what you are going to see is those movies will not just be available on streaming, but they will be made available to exhibitors worldwide on a non-exclusive basis,” Kilar predicted. “You will see screen inventory being given to those types of movies as well.”
But those theatrical films may be exceptions to the rule. Case in point: Hulu acquired Lionsgate’s Lopez-fronted Shotgun Wedding, which had been planning a June theatrical release; Reese Witherspoon’s return to the genre, Your Place or Mine, is en route to Netflix; and genre mainstay Nancy Meyers is making her untitled comeback film with Netflix after stating in 2019 that the film business, in light of the disappearance of the mid-budget comedy, “has changed in a way that is somewhat unrecognizable to me.”

Ian Bricke, Netflix’s vp independent film, says streamer hits help lift all boats in terms of getting projects off the ground. “There’s a lot more material in the genre today than there was five years ago because the genre had fallen a little bit out of favor, and so folks weren’t necessarily writing rom-coms on spec, or a lot of the scripts we would get were 15 years old,” Bricke says. “For us and all the other studios that have leaned into the genre, there’s a little bit of a renaissance happening, which is very exciting.”
But the messaging has been mixed to creatives. Set It Up editor Wendy Greene Bricmont recalls Netflix “teasing” the project’s team that it could get a limited theatrical release, which ultimately never happened. (Theater chain Cinemark, which operates 324 locations in the U.S., has shown 10 Netflix films over the past year.) Bricmont, who is now working on a rom-com for Amazon, adds: “There was never any of that teasing on the Amazon Studios project right now. It’s like, ‘Nope, you’re going to end up a thumbnail’ – no one said that, but that’s the way you feel sometimes.”
For many creatives who spoke with THR, the industry’s increased focus on inclusivity, both in the types of stories told and the people who tell them, has helped the genre evolve.
Michael Urie, who starred in Single All the Way (2021), Netflix’s first LGBTQ Christmas rom-com, points out that many straight performers continually star in numerous Christmas comedies for platforms like Hallmark. “I’ve never been offered a Christmas movie before, and I haven’t been offered once since, and as far as mainstream rom-coms at studios, that hasn’t happened either,” says Urie. “Will that happen with gay actors? I have no idea. I don’t know if you just get one.”
Kat Graham, the star of three Netflix rom-coms including the upcoming Love in the Villa, agrees that change has been a slow build. “I do think the industry has a way to go,” she says. “There are still not enough LGBTQI leads, Asian leads, Latinx leads, African American leads, et cetera. But I do see progress; I’m excited for more progress to come.”

Bowen Yang, who appears in Lost City and also has roles in Bros and Hulu’s upcoming LGBTQ rom-com Fire Island, says he adores the genre, but that with so many of these films premiering on streaming, the industry “relegated it to some corner of the media landscape that it didn’t quite deserve.” He adds, “I was just so refreshed in watching The Lost City in a theater. I was like, ‘I miss this kind of movie, and I miss this experience.'” 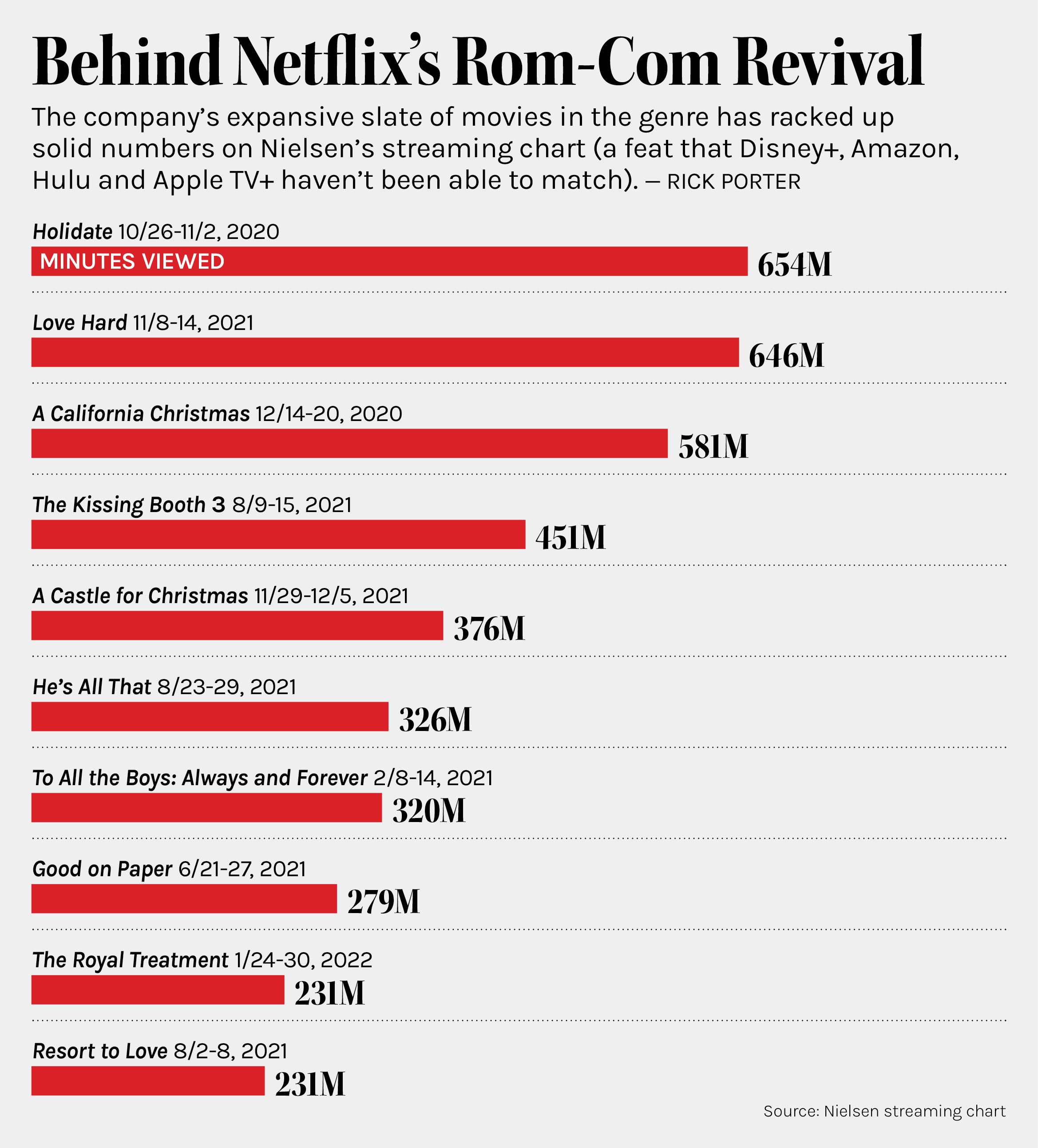 A version of this story first appeared in the April 13 issue of The Hollywood Reporter magazine. Click here to subscribe.